The Jazz Room finds its groove

Pat Collins is one of Canada’s best-loved Jazz bassists and modern Jazz composers. His first CD, “In The Moment” (2005), features him with some of Canada’s finest jazz musicians, including Mike Murley, saxophones, Reg Schwager, guitar, and Barry Elmes, drums. A well sought-after sideman, Pat has appeared on more than 50 recordings over the past decade. He has also appeared on stage with a wide range of superb, internationally recognized talent, including Oscar Peterson, Ed Bickert, Moe Koffman, and Diana Krall. He is joined tonight by Fernanda Cunha, a Brazilian female vocalist with an international following, and a voice that melts hearts. 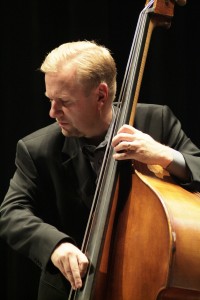 Indeed, this is not the first time that Pat has played in Waterloo, as he has appeared previously at the Black Hole Bistro.

“Having heard Collins in many situations over the last couple of decades, I appreciate his wonderful instrumental technique and warm, full sound. He plays cleanly and clearly with musical intelligence to the front, and he seems to know “all the tunes” for the gig…” Whole Note

“Pat Collins is one of Canada’s finest bassists…” Toronto Jazz