Jaron Freeman-Fox and The Opposite Of Everything 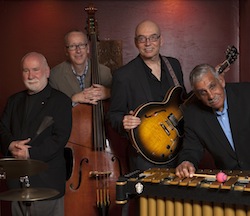 The original CANADIAN JAZZ QUARTET was founded in 1987, the result of a musical collaboration among four of the best musicians on the Toronto club and studio scene. The band plays mainstream jazz with a swinging and graceful treatment of standards and original material. The CJQ The lineup has evolved somewhat over the years, but the CJQ remains the standard of excellence in jazz in Canada.

Vibraphonist FRANK WRIGHT has been an important part of the Toronto jazz scene since the 1950s when he was a regular performer on the ‘after hours’ club circuit. During its existence, he appeared regularly at Toronto’s Bourbon Street with clarinetist Henry Cuesta, and toured with him to California jazz festivals in Palm Springs, San Diego, and Sacramento. He was a frequent performer with The Garden Avenue Seven in Florida and on tour across the U.S. In the mid 1980s he formed a quartet with well-known drummer Archie Alleyne and together, they were often featured at the famous George’s Spaghetti House. He has worked with celebrated jazz names including Joe Williams, Norman Amadio, Jim Galloway, Rob McConnell, and Peter Appleyard.

TED QUINLAN is respected as one of Canada’s most multi-faceted jazz musicians, highly skilled as a solo jazz guitarist, session player, writer, and dedicated educator. He is a sought-after sideman, frequently appearing with the “who’s who” of Canadian jazz artists on concert stages, in clubs, and in jazz festivals from coast-to-coast. Throughout his abiding career, he has performed with some of the biggest international jazz stars including Freddie Baker, Chet Baker, Eddie Harris, Jimmy Smith, and Joey DeFrancesco.

Here is the CJQ with a slightly different line-up at the Toronto Jazz Festival in 2011 with guest Scott Hamilton.