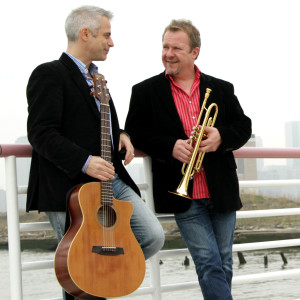 “It’s a perfect musical pairing like Cabernet and steak that you can taste for yourself” – TIM TAMASHIRO, CBC

“(Sean Harkness) is a technical virtuoso who’s Joe Pass / Tommy Emmanuel fingerstyle approach is always in service to telling a story or creating a feeling within the song; [Harkness] transcends many genres and can touch listeners of many backgrounds.” -JAZZ INSIDE NEW YORK

Trumpet/Flugehorn and Guitar seems like an unlikely combination, but in the hands of these two masters, the combination is something special.

As a solo artist with six CDs, Sean Harkness’ music is on Windham Hill Records [Sony/RCA/BMG] and a list of independents. He has also scored music for television, including World’s Strongest Man, ESPN, NASCAR and ABC Sports.