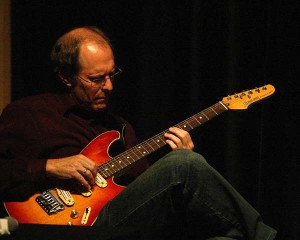 Lorne Lofsky started as a typical teenage rock ’n roll guitar player, playing in basement bands and at high school dances. In his late teens, a friend turned him onto Miles Davis’ Classic disk “Kind of Blue” which dramatically altered his approach to playing music. During a week’s gig at the legendary George’s Spaghetti House in Toronto, he met Oscar Peterson, which lead to an enduring relationship, including two years as a member of the Oscar Peterson Quartet, performing at Carnegie Hall, the Montreal Jazz Festival, and around the world.  Lorne was featured on 3 of Oscar Peterson’s recordings, including “live in Paris”.

Lorne is unquestionably one of the finest jazz guitarists in the world today. He is a master improviser, manipulating time and melody and taking chances on original compositions and standard tunes. He brings to the Jazz Room, his “Inside Out” trio featuring Barry Romberg on drums and Kieran Overs on bass.  This trio has worked together since their 2004 release “What is this thing” , a recording featuring swinging, time-shifting abstractions of standard vehicles like “Autumn Leaves,” “What Is This Thing Called Love?” and “All the Things You Are.”