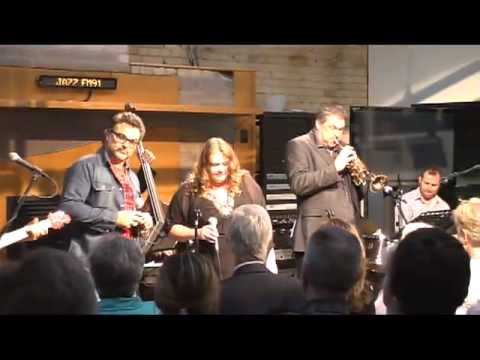 Shine On: the Universe of John Lennon is a spectacular group performing music by John Lennon and the Beatles uniquely arranged by Michael Occhipinti. The musicians in the group collectively boast over 20 JUNO Award nominations, and include the distinct voices of Elizabeth Shepherd, Yvette Tollar, and Dominic Mancuso, paired with the singular talents of Mark Kelso (drums), Kevin Turcotte (trumpet), Roberto Occhipinti (bass), and Michael Occhipinti (guitar). Shine On came together in December of 2010 for a concert to mark the 30th Anniversary of John Lennon’s passing. Taking utter delight in the audience’s enthusiasm and the chance to work together performing an iconic repertoire, the musicians recorded and released the album The Universe of John Lennon in the summer of 2012, and have since appeared at festivals and venues from St. John’s to Victoria to New York.