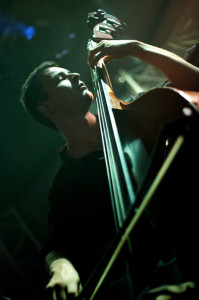 Born and raised in Paris, Olivier started traveling at a very young age in Europe and worldwide. he’s lived mainly in France, Netherlands, Reunion Island and now lives in Montreal since 2010. He graduated from Music Academy International in Nancy and The Centre des Musiques Didier Lockwood. He obtained his first prize in jazz interpretation from Conservatoire National de la Région Réunion where he also studied classical bass. He has a professional master’s Degree in film music writing from The Université du Québec à Montréal.

Olivier’s music is difficult to describe. It is subtle and elegant with an African/Word music vibe, sometimes reminiscent of Pat Metheny’s chamber compositions.  Olivier calls his music “New School”. This is quiet, lovely stuff and this concert will appeal to listeners of ECM, Windham Hill, and other crossover labels.

Olivier plays Brubeck’s “Take Five” on the bass and Kimbala