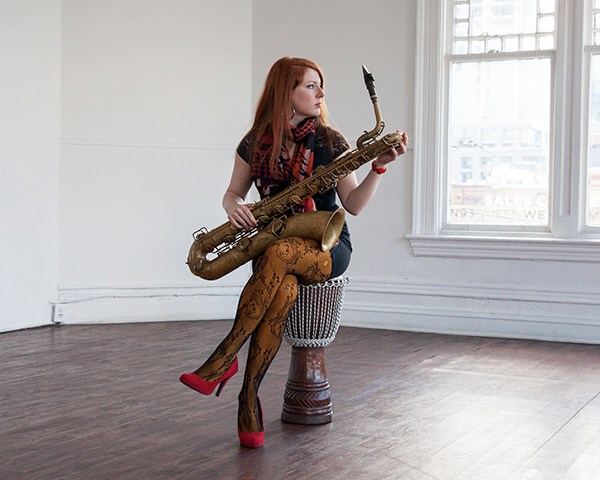 Alison Young is a JUNO nominated saxophonist, vocalist, and composer. Born in Ottawa, she moved to Toronto in the early 2000s to study music at the University of Toronto, and has been an active presence on the city’s jazz scene ever since. Young has toured across North America, Europe, South America, the Caribbean, and Asia with acts such as Alysha Brilla, Joe Sealy, Big Rude Jake, Johnny Reid, and the Shuffle Demons, and has appeared on over 40 recordings. In 2017 Alison was chosen as one of the ‘Best 35 Canadian Jazz Artists under 35’ by the CBC. Later that year, she was featured in Pat LaCroix and Ted O’Reilly’s book, “Toronto Jazz Treasures” alongside many of her musical heroes. Alison released her debut album “So Here We Are” in 2018, and received a 2019 JUNO nomination in the “Solo jazz instrumental” category. The album has been in regular rotation on CBC and JazzFM, as well as independent radio stations across the country, and reached #1 on the Earshot National Jazz Chart in the summer of 2019. Also in 2019, Young played a 16 city stadium tour across Canada with pop icon Corey Hart, and was featured on his hit single “Dreaming Time Again”.

“I Just Want to Make Love to You”