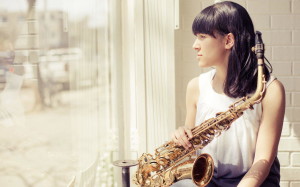 “She stands out as a player with an alternatingly pure and hard-toned strength, facility and imagination.” –
Gapplegate Music Review

Juno-nominated in 2013 for their debut album, “The Sky Was Pale Blue, Then Grey,” the Allison Au Quartet is a Toronto-based modern Jazz ensemble. Since it’s formation in 2009, the group has maintained a steady performance schedule at Toronto’s major Jazz clubs. The group has also attended the Creative Music Residency at the renowned Banff Centre for three consecutive years (2011-2013) funded by the TD Jazz Fellowship Scholarship,The Alfred and Phyllis Balm Scholarship, and The Margareta and Benno Nigg Scholarship.

Saxophonist/composer Allison Au is constantly intrigued by new sounds and textures and strives to emanate a sense of exploration and discovery in her work. She aims to create musical templates that sound fresh, unconventional, yet engaging and thought-provoking.