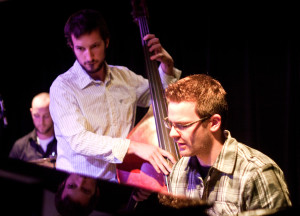 With out a doubt, the expression “something for everyone” applies to a Jason White Trio concert.  In its third incarnation, consisting of Jason White (piano), Paul VanDyk (bass), and Joe Ryan (drums), the trio has found an exciting, intuitive dynamic. They draw extensively on jazz, avant garde and progressive rock, minimalism, and even Friedrich Nietzsche to engage audiences on sometimes delicately cerebral, sometimes frenetically visceral romps across genres. In their music, there is something fans of almost any genre can ponder and pulsate over.Their originals defy convention, and their covers of The Bad Plus, Frank Zappa, and The Isley Brothers, to name a few, are truly inspired. What started fairly innocuously as a gigging outfit for hire has become a creative outlet and musical destination for Jason, Paul, and Joe.

Jason is the main composer in the trio. He received his tassels studying Music Composition at Wilfrid Laurier and has been teaching music full-time for more than 15 years while maintaining a demanding performance schedule at jazz clubs and symphonic concert halls alike. His ability has been described as a “force of nature” and “one of the most versatile piano players around,” and he absolutely shines in live settings.

Joe Ryan’s musical ears reside about 20 feet around the ensemble in his live performances, and Paul’s focus, drive, and skill emanate freely from both his physicality and sound on his upright bass. Both Paul and Joe studied at Canada’s best contemporary music school, Humber College, and maintain busy performance schedules in two of Canada’s busiest musical cities, Montreal and Toronto.

Heading to a Jason White Trio show is like walking into a circus-laboratory-record store in a Beckett play. Absurdity, fluidity, nostalgia, profound amazement, and surreal aesthetic pleasure are all common reactions to even the same moment in their music. The trio’s greatest appeal is that while what they do is unique, influentially broad, and eclectic, it is also so groovy, accessible, and entertaining. If you like The Bad Plus, Esbjörn Svensson Trio, Medeski Martin & Wood,  or even Emerson, Lake & Palmer, you shouldn’t miss this show.