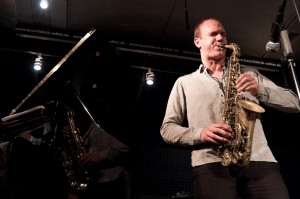 Take one listen to the joy and energy of this unpredictable band and try not to get caught up in the excitement. Boom Crane’s rough-and-tumble interplay meets in a place where everything is an option. They veer happily between wide open jazz, the swing tradition and heavy grooves. A trio of long time musical compatriots who play with intensity and fire; they take the music and manhandle it into unexpected shapes. Boom Crane’s debut release on Fresh Sound New Talent (FSNT-432) shows the depth that can only be found in over a decade of making music together.

The prolific and unpredictable nature of saxophonist Peter Van Huffel’s output has been evident since he first emerged on the scene as a leader in New York City. Now based in Berlin, he is a conceptualist able to translate the traditions of jazz and new music into an eclectic, forward-looking language of his own; virtuosic and soulful and always accessibly vibrant.

Inspired by all musical genres, Michael Bates is a compelling example of what it means to be a musician in the new millennium. He is a visionary composer and bassist who thrives in many musical worlds. For over a decade he has been performing cutting edge music and “simply put, Bates has the ability to make a huge impact on the existing state of modern jazz”– (Glenn Astarita).

In all of the diverse musical spheres he embraces, Jeff Davis is one of today’s most swinging and energetic drummers. His playing transcends the stylistic borders associated with his instrument. He has developed a unique improvisational language that is sonically rich and instantly compelling.