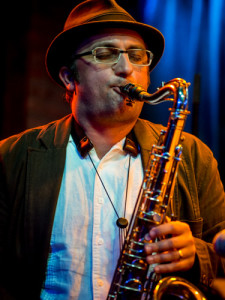 “The saxophonist/banjoist’s Down Home is three parts roots music, two parts jazz, one part blues, mixed on a country porch, and, pardon the cliché, it cooks.”  – Mark Corroto, All About Jazz

Born in Eastern Europe, brought up in the wilderness of the Great White North, and later thrusting into the urban Jungle of New York City, it is no surprise that Petr Cancura’s musical pallet is as wide as it is. A saxophonist with a vast knowledge of Jazz, Balkan, African and American folk traditions, Petr performs on banjo and mandolin as well as on the medium format black & white camera… all of which influences each other into a Roots Song & Improvising music machine with a visual sensibility.

Petr Cancura has performed with Grammy-nominated Danilo Perez, Grammy-nominated Julian Lage, Bob Moses, Joe Morris, Jacek Kochan, Kathleen Edwards, Kenny Wollesen, Joe Maneri, Cecil McBee and the Juno award-winning Mighty Popo. He is currently performing as part of the Ghost Train Orchestra, The Richie Barshay RB3, The Forro Brass Band amongst others. Petr’s source of expression is most focused on his blend of Americana roots music and jazz in his groups Big Sky and Down Home.

The adventure continues with Petr Cancura’s position as the Programming Director of the Ottawa International Jazz Festival, crafting together a world class festival with hundreds of shows annually. You may also find Cancura in the classroom giving workshops all across the US and Canada.

Here is Petr playing mandolin on “the Parrot Song”

….and Tenor on “Farmer’s Song”