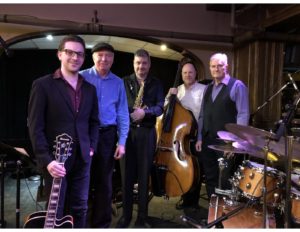 The Phoenix Jazz Group performs jazz in a melodic fusion style. Group members are very versatile in a number of different genres. A review from The Jazz Society of Oregon stated ” they’re a Canadian quintet of musicians with impressive credentials whose program of all original music swings with ease. ” Since their debut album ” Extensions ” was released in 2009, the music of The Phoenix Jazz Group has received ongoing airplay on Canada’s Premier Jazz Station Jazz FM 91.1 in Toronto as well as on jazz radio in the U.S. and over 60 other countries worldwide. Phoenix performed at the 2018 Uptown Waterloo Jazz Festival in Waterloo On.  A review of the group’s most recent album Amparo from Whole Note Magazine in Toronto states ” It is in the fusion of myriad styles that the group’s music speaks best. This can be felt throughout the album, but
nowhere more strongly than in the profound beauty of Amparo, the title track itself.”

Listen to The Phoenix Jazz Group in “Something (Never Change)“.