Ted Quinlan is widely known as one of Canada’s most multi-faceted jazz musicians, highly skilled as a solo jazz guitarist, session player, writer, and a dedicated educator.

“Quinlan is clean and crisp, and his explorations open a wide panorama into which he instills a range of moods. While the emphasis is on contemporary styling, there is a nod to mainstream jazz with a tinge of country music that adds to the appeal.” – allaboutjazz

A cast of musical giants each of which has received recognition through JUNO awards and nominations.  Their music, featured on the release Streetscape ranges from the soulful acoustic Go West to the multi-dimensional Speak Easy.

Opening for Ted will be another stellar guitar trio from Toronto, the Sam Dickinson Trio with Julian Anderson-Bowes on bass and Derek Gray on drums.  You’ve seen these folks before, as members of headlining shows… hear them on the 14th, at no additional cost, while you indulge in dinner and drinks before our main show! 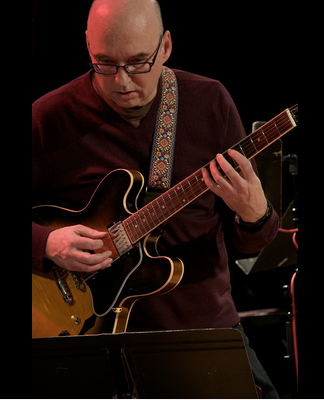