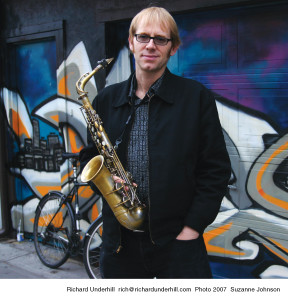 Richard Underhill’s warm alto sound, great writing and arranging skills and in-from-the-outside soloing make him one of Canada’s most distinctive jazz performers. Richard was awarded the Roy Thomson Hall Award of Recognition in 2008 for his contribution to Toronto musical and artistic community. He won a 2003 Juno Award for his jazz debut ‘Tales from the Blue Lounge’ and was nominated for the Prix du Jazz at the 2003 Montreal Jazz Festival. His debut video ‘The Old Guys’ climbed to No.1 on the Bravo! video chart and won a 2004 SOCAN Number 1 award.

The founding member of Toronto’s outrageous Sun Ra influenced Shuffle Demons, Underhill took this ground breaking Bop Rap ensemble from the streets of Toronto across Canada and to Europe. This audacious group played jazz, folk, world and rock festivals from Halifax to Vancouver and from Italy to Estonia from 1986 – 1997, touring across Canada 15 times and through Europe 15 times and were well received at several Jazz festivals including the North Sea Jazz, Molde Jazz, London’s Outside In Jazz festival, the Edinburgh Jazz festival, the Sfinks festival, and Jazz a Vienne. The Shuffle Demons feature a fusion of hard bop and rap combined with exotic costumes and a no-holds-barred performance style. They recently celebrated their 25th Anniversary with a cross Canada tour and in 2006 performed at festivals in India, China and Europe.