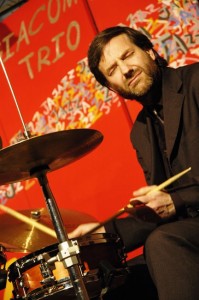 Italian drummer Andrea Marcelli plays drums the way Gary Burton plays vibes – music filled with air and space  – a European Jack Dejohnette.  Andrea graduated in 1986 from the L. Refice Conservatory in Frosinone (Rome) in Classical Clarinet, Jazz Composition and Arrangement. He moved to USA in 1989, spent 8 years in Los Angeles and 4 in New York quickly gaining a Special Green Card Visa as a “First preference Alien with Extraordinary abilities in the Field of Jazz”.

Andrea has been resident of Berlin since 2001.

This is beautiful jazz with strong European classical tradition influences. Here is a sample…..