The Woodhouse with Barbra Lica 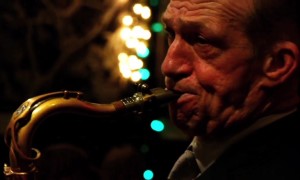 Bob Brough is best known as a tenorman who’s appeared over the years with various rock, jazz, and classical artists and has recorded as a sideman on many recordings including 2 Juno-nominated CDs with ‘Time Warp’ during the 1980’s. More recentlyrecorded examples of particular note arehis solo and ensemble performances on tenor
saxophone on Richard Underhill’s 2003 Juno-award winning CD ‘Tales from the Blue Lounge”
The band plays a mixture of standards and originals ranging in style from BeBop to Swing, and from Modern to Free Form. They draw from an eclectic variety of pop, ethnic, classical music, and blues for inspiration.
In 2004 the band was chosen to open for Herbie Hancock on Opening Day for The Ottawa International Jazz Festival.
Bob Brough – tenor saxophone
Adrean Farrugia – piano
Artie Roth – bass
Terry Clarke – drums
Here is Bob Brough with “In a Sentimental Mood”