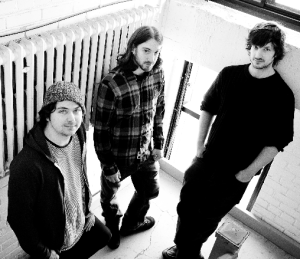 “Jazz, you say? Oh yeah, and a robust jazz at that! …Hypnotic, muscular rock on the same page as The Bad Plus. In brief, something that will make you move!” -Le Journal de Montréal

Click here to read Terry Pender’s interview with Kite!
Kite has been establishing an alternative path for the modern jazz trio since it was formed by guitarist Eric Couture, drummer Eric Dew, and upright bassist Paul Van Dyk in Montreal in 2008. Five years of relentless rehearsing, composing, and touring have created a bold sound that often elicits comparisons to both 70s prog icons, “Gentle Giant” and to modern day alt-jazz giants, “The Bad Plus”. Each member of Kite is a gripping presence on his instrument, but it’s a determination to experiment in the face of jazz tradition and to put it all on the line for the band that makes Kite special.

Kite has received several grants from the Quebec Arts Council and FACTOR, was a finalist in the “Jazz En Rafale” contest for emerging artists, and was featured on a YOUTUBE video with 5 million views. Kite’s debut album (Self-Titled, 2011) was crowd-funded by a very supportive fan base through Kickstarter.com. Kite has played hundreds of shows in venues from Quebec City to Toronto to Philadelphia.