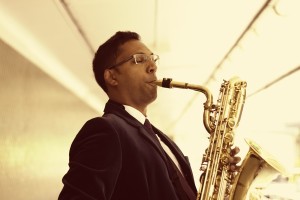 “Beddage has a well-developed identity on the demanding baritone, playing with real power…”  -The Whole Note Magazine

“…An example of what a powerful and modern baritone could be… ” – modernbarisax.com

JUNO-nominated and Galaxie award-winning musician Shirantha Beddage is a saxophonist, composer and educator from Toronto, Canada. Drawing inspiration from jazz greats such as John Coltrane, Pepper Adams and Thelonious Monk, he is being hailed by critics as a fresh and powerful voice on the baritone saxophone.

His newest CD, Identity (Addo Records, 2012) was nominated for Traditional Jazz Album of the Year at the 2013 JUNO Awards. Shirantha also earned the 2013 Galaxie Rising Star Award at the Montreal Jazz Festival for compositions from this album. As a composer for film and television, his original compositions have been featured on the FX television series Fargo (2014) starring Billy Bob Thornton and Martin Freeman. He is the Head of Theory and Harmony at Toronto’s Humber College music program, where he teaches Music Theory, Pedagogy and Big Band. He also adjudicates regularly at festivals throughout the country including MusicFest Canada, where he serves as Vice-Chairman of Instrumental Jazz.

Check out the Traveling Wall-baris at the Pilot Tavern.   Don’t try this at home.