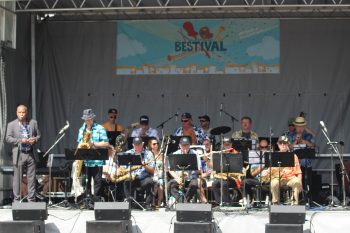 Can we fit them all on the stage? Yes, we can! and hopefully there will still be room for the audience! Don’t worry, there always is, but come early to get a seat as this show is always crowded.

KW Big Band Theory is celebrating the end of 8 years of local contemporary, big band music. There have been many BBT collaborations over these first 8 years. They have hosted and played with Don Thompson with whom they recorded their debut album “Evidence”. Last season they shared the stage with John MacLeod of the Rex Hotel Jazz Orchestra. As well this year, BBT teamed up with the Cambridge Symphony Orchestra and Derek Hines for a tribute to Frank Sinatra.

For this special night, the band will be presenting big band arrangements of genre-resisting, JUNO award winning guitarist, composer, and band leader Michael Occhipinti. These arrangements were originally featured by the Neufeld – Occhipinti Jazz Orchestra (N.O.J.O.) back in 1995 – 2005 on 5 recordings each receiving Juno nominations and the 1995 self-titled debut album awarded Best Contemporary Jazz Recording. In 2010, N.O.J.O. explored the music of Pink Floyd’s “Dark Side of the Moon” masterpiece recording. KW Big Band Theory has been working hard to bring some of these arrangements to life for the KW jazz community. You are in for an interesting sonic ride with Occhipinti’s complex, adventurous, and sometimes humourous arrangements and BBT’s passioniate, expressive and often explosive sound.

BBT plays “The Count is In”

BBT plays “The Count is In”