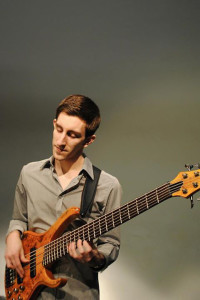 Brad Cheeseman has been a performing musician in the GTA for nearly a decade. He is an Honours graduate of Mohawk College’s Jazz Performance program, where he studied under the likes of Kieran Overs, Will Jarvis, Dave McMurdo and Mike Malone. He later moved to Toronto to continue his studies at Humber, studying with Vaughan Misener, Pat Kilbride, Kirk MacDonald and John MacLeod. Brad has been the recipient of several awards for academic and musical excellence, including the Sully Kovacs Memorial Scholarship (2008), the Gordon and Anne Wragg Music Scholarship (2012) and the Yamaha Canada Music Ltd. Scholarship (2013), and was nominated for Bassist of the Year in the 2012 Hamilton Music Awards.

The Brad Cheeseman Group showcases the Toronto bassist’s talents as both a performer and composer, and represents the culmination of nearly a decade of musical exploration. By blending the rich language of jazz with elements of progressive rock, R&B, fusion and other styles, Brad was able to marry his many influences into a unique and musical compositional voice. The music seeks to bridge the gap between jazz and other genres in order to provide an engaging, emotional and exciting musical experience for all listeners.