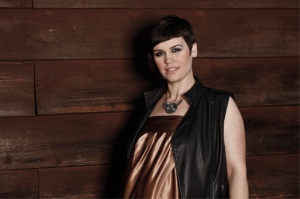 Singer, Hannah Burgé (bur-jeh) has just released her debut album, Green River Sessions. A synthesis of contemporary jazz and world music elements, GRS is a record of all heart.

Heart for the urban spaces and the quiet peace that forests bring. Burgé has been a city girl since 1999, when she moved to Toronto to pursue a career in music. Her roots are in Orillia, ON., where her English and Métis heritage caused her ancestors to settle. With ample forests to be lost in, the land has a particular hold on Hannah, which is evidenced in her music.

For this concert, Hannah will be joined by Vibraphone and Harmonica virtuoso – Hendrik Meurkins.

“With flawless intonation and time, and a deep bag of solo ideas, Meurkens could be favorably compared to the great Toots Thielemans and the best who’ve ever elevated the status of the ‘Mississippi saxophone.” –Dan Emerson Pulse Magazine, Feburary, 2001

Hendrik is the most important jazz harmonica player since Toots Thielemans. German-born but now based in New York, Meurkens’ recordings and performances garner worldwide acclaim because the transcendent beauty of his music has universal appeal.

A two-mallet player in the tradition of Milt Jackson and Bobby Hutcherson, Hendrik Meurkens was en-route to being an instantly recognizable vibraphonist when he heard Toots Thielemans. Inspired by the sound of Thielemans’ harmonica, he taught himself the difficult-to-master instrument.

Hendrik Meurkens’ other life-changing musical experience was his introduction to samba and bossa nova. He was so moved by Brazilian music that after perfecting his unique musical voice at Berklee, as a vibraphone major, he moved to Rio in the early 80s to totally immerse himself in music and culture of Brazil.

Here is Hendrik on Vibes with “Sambatropolis”

… on Harmonica with “Bolero Paca Paquito”