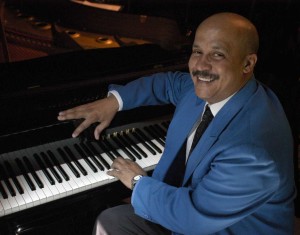 Hilario Durán is an unparalleled pianist, as well as being a composer and arranger of the first order…one of the greatest Cuban pianists of the 20th century”. —Chucho Valdés

“one of the world’s contemporary Cuban pianists that moved jazz into the 21st century”. – Latin Jazz Corner

Hilario was honoured with prestigious 2007 Chico O’Farrill lifetime achievement award in Miami for his outstanding contributions to Afro-Cuban jazz and Latin Jazz. He’s performed with Cuba’s legendary “Orquesta Cubana de Música Moderna” and was invited by former leader Chucho Valdés to replace him as pianist when he started the famous group Irakere.

As arranger, pianist, musical director with Arturo Sandoval for nine years, he toured the  world and performed with “greats” Dizzy Gillespie, Michel Legrand, among many others.

Hilario was born 1953, Havana, Cuba and Immigrated in 1998 to Toronto, Canada. He was named one of the 10 most influential Hispanic Canadians in 2009.

Here is Hilario with a Cuban all star big band