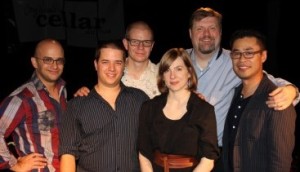 Led by Toronto based drummer Ernesto Cervini, Turboprop is a hard-driving sextet featuring the stellar front line of Kelly Jefferson and Tara Davidson on saxophones with William Carn, trombone, and supported by Adrean Farrugia on keys.