Sex & All That Jazz!

Jason Raso has a funk heart and a jazz head.

They are hard wired together by the 4 strings of his bass guitar, and an innate ability to craft music that will tear you from your seat, take you on a journey, nay a trip back to the 70s.  Jason has assembled a quintet paying homage to the funked-up fusion period for Herbie Hancock and his Head Hunter band.  This  album was pivotal moment in jazz where rhythm and blues fans discovered an appealing cross-over in the electric keys sounds of the path-breaking band.  One of the best-selling jazz albums and ranked as one of the top 500 recordings ever, this tribute is sure to get you bopping in your seat.

Joining Raso for this outing will be two keyboardists Rob Hannam and Jeff Daniels.  Brent Rowan will rip it on the saxophone, while Adam Bowman lays down the beats on kit.  A veritable Guelph mafia, this group has a long history in the area and have earned a reputation as strong Jazz Room favourites.

For over 20 years, Raso has pursued the groove to such excellence that Exclaim Magazine declares, “Jason Raso’s bass is a full-on orchestra of ground vibrating pleasure.”

Through his first 5 albums and countless live performances, from intimate settings to festival stages, Jason and his band have entertained and connected with listeners. You could focus on his finely honed technique, but it’s the energy and emotion of the tunes that carries the night.

Jason’s sixth album, The Red Arrow, is a debut with Summit Records that explores his jazz sensibilities with creative originals like Corner Pocket. He doubles on electric guitar, and the acoustic double bass, bringing endless groove to the jazz blend. 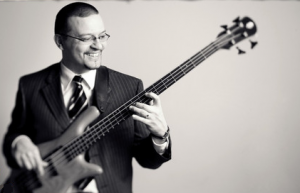